Some Background on Boards

Some Background - Stan
A very interesting concept to ponder.  The stock boards and rudders function satisfactory if you are pleasure sailing.  I have owned and, or sailed numerous boats over the years.   If you think of the foils as underwater wings you are thinking along the lines that I first thought of when designing, fabricating, and playing with boards over the time I have had Sea Sprays.
My earliest thoughts were that catamarans are faster than monohulls in moderate to strong winds.  In some cases one stock board and one rudder were nearly as large as a typical monohull set up.  Add to this the fact that there are two hulls which create some lift one has to wonder how much is needed in the way of boards.  My first set of self made boards were about 2/3 the size of the stock board.  They seemed to work just fine and I sailed with them for several years before going even smaller.
The next radical change was a set of boards and rudders that looked a bit like daggers.  The daggerboards had a narrow handle that allowed the board to pivot under load so that the angle of attack to windward was better(I thought).  They worked ok and I used them until they finally broke - still have the rudder blades somewhere. 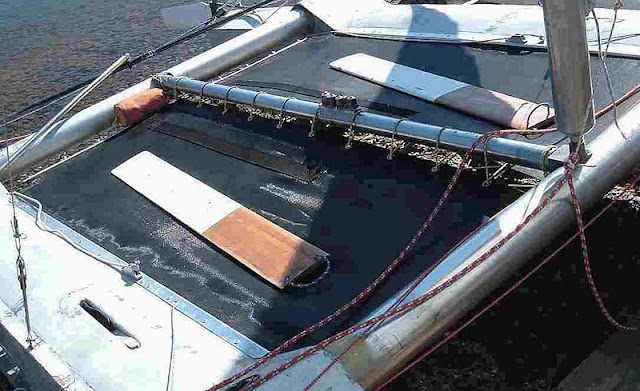 Currently a number of us are using boards with a chord of @ 9 to 1.  Essentially if you have a board 3/4 of an inch thick you would multiply the width by 9 which would give you 27/4 or 6 3/4 inches in width.  Maximum thickness should be between 30 and 34% from the leading edge which would have a radius of @ 3/8 inch.  Trailing edge has two possibilities one being a knife edge the other being a flat edge of 1/8 inch or less.  If you have narrow slots you would likely aim for 5/8 inch with a 4 5/8 width.  If you can find rudder castings for the narrower blade go for it.
You can make a gauge to allow consistancy in your blades and you can work out the angles for and then cut strips on your table saw that would laminate into a rough board with a bit of shape that would require less sanding to finish
Email ThisBlogThis!Share to TwitterShare to FacebookShare to Pinterest
Home
Subscribe to: Posts (Atom)